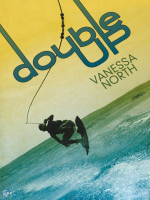 Fifteen years ago, Ben Warren was a wakeboarding champion: king of big air, ballsy tricks, and boned grabs. Until a career-ending injury left him broken in ways he still has no hope of fixing. Now he takes his thrills where he can get them, and tries not to let life hurt too much.

Then Davis Fox arrives in Ben's sporting goods store with a plan to get in touch with his estranged brother by competing in the annual wakeboarding double-up contest. The catch? He's never ridden before. It's crazy, but Ben's a sucker for the guy's sob story — and for his dimples, too — so he agrees to coach Davis.

Davis is everything Ben isn't: successful, confident, and in love with life. And he wants Ben to love life — and him — too. But before Ben can embrace a future with Davis, he needs to remember how to hope.