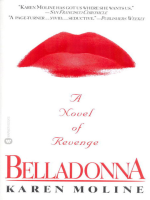 Description
Who is Belladonna?

In New York City, she's known only as the mysterious masked woman who presides over the most exclusive, opulent club of the times.

In Virginia's blue-blood countryside, she's known as the Contessa, the elusive heiress who flaunts convention and shuns human contact.

But then there are a wretched few who remember her from "The Club" and knew her as a fresh-faced innocent whom they desired...and misled...and left to the sadistic devices of a nobleman who robbed her of her youth, her dignity, and, ultimately her heart.

As Belladonna's story, told by one of her faithful manservants, slowly unfolds, we learn the horrifying truth behind Belladonna's masks and her insatiable desire for vengeance. It is a truth that involves betrayal, murder, depravity -- a truth so chilling that it will pit brother against brother, father against son, and will force Belladonna to ultimately confront the one man who can ultimately either destroy her, or set her free.
Also in This Series