The Ex-Boyfriend's Handbook: Eddie will do whatever it takes to become her Mr. Right 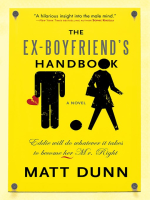 After ten years, Jane's had enough of Edward Middleton. "You've let yourself go," she tells him. "So I'm letting you go too."

Determined to get her back, Edward realizes he must learn how to make women want him again. But right now, he's the kind of man who puts the "ex" in "sexy." One thing is certain: if he's going to be Jane's Mr. Right, he needs to turn himself around. From Atkins to Waxing, Edward begins working his way through the makeover alphabet.

But is a change in appearance what Jane really wants? Can cuddly Teddy really become sexy Eddie? Or is there more to the dating game than meets the eye?

"[The Ex-Boyfriend's Handbook] gives a real insight into the different ways men and women think."
-Prima