The Family Mansion: A Novel 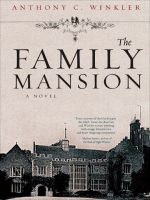 A darkly comic novel of an Englishman in nineteenth-century Jamaica: "A powerful and deeply moving tour de force" (Library Journal).

The Family Mansion tells the story of Hartley Fudges, whose personal destiny unfolds against the backdrop of nineteenth-century Britain, a time when English society was based upon the strictest subordination and stratification of the classes. Hartley's decision to migrate to Jamaica at the age of twenty-three seems sensible at first: in the early 1800s Jamaica was far and away the richest and most opulent of all the crown colonies. But for all its fabulous wealth, Jamaica was a difficult and inhospitable place for an immigrant. Aside from violent slave revolts, newcomers had to survive the nemesis of the white man in the tropics—namely, yellow fever.

From the author of God Carlos, who writes with "a genuine fondness for this complicated and conflicted place," this is a riveting work of historical fiction filled with a blend of sadness and sly humor (Publishers Weekly).

"Winkler submits imperialist dogma and the English aristocracy's casual acceptance of violence and cruelty to punishing satirical critique. He takes special pleasure in redefining the idea of the 'English gentleman,' embodied by his clueless and spoiled protagonist, Hartley Fudges, a terrifically rendered young English aristocrat who gets himself banished to Jamaica after attempting to kill his brother for his inheritance . . . Essential reading for fans of literary fiction." —Library Journal