A Nice Class of Corpse »

A Nice Class of Corpse 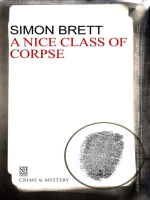 The Devereux is a nice residential hotel which caters for a nice class of guest. But the arrival of Mrs Pargeter, an attractive widow, seems to act as a catalyst of disaster for everyone connected with the hotel. On the morning after her arrival, the corpse of one of the frailer residents is found at the foot of the main staircase, and shortly after that another death shakes the gentility of the hotel. Deciding to investigate herself, Mrs Pargeter discovers that more than one person in the Devereux has a motive for murder.