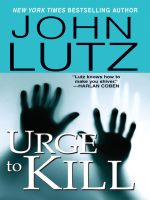 A retired homicide detective turned PI tracks down a killer seducing women to their deaths in this twisted crime thriller by the author of Night Kills.

For A Killer, Once Is Never Enough
Homicide detective Frank Quinn can't stay retired when a new breed of murdering madman is on the prowl. In a city terrorized by bloody brutality, Quinn and his team hunt a psychopath who lures beautiful women into a night of unbridled passion, then wakes them to a vicious, drawn-out death. Stumbling over a trail of horribly defiled bodies, Quinn can't seem to catch up to the killer—because the killer is about to catch up to him . . .
Praise for the writing of John Lutz

"Lutz is in rare form." —The New York Times Book Review on Chill of Night
"Another enthralling page turner." —Publishers Weekly on In For the Kill
"A dazzling tour de force." —St. Louis Post Dispatch on Chill of Night
"Lutz knows how to make you shiver." —Harlan Coben