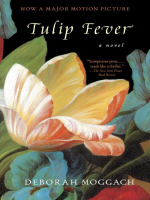 Description
A sensual tale of art, lust, and deception—now a major motion picture In 1630s Amsterdam, tulipomania has seized the populace. Everywhere men are seduced by the fantastic exotic flower. But for wealthy merchant Cornelis Sandvoort, it is his young and beautiful wife, Sophia, who stirs his soul. She is the prize he desires, the woman he hopes will bring him the joy that not even his considerable fortune can buy. Cornelis yearns for an heir, but so far he and Sophia have failed to produce one. In a bid for immortality, he commissions a portrait of them both by the talented young painter Jan van Loos. But as Van Loos begins to capture Sophia's likeness on canvas, a slow passion begins to burn between the beautiful young wife and the talented artist. As the portrait unfolds, so a slow dance is begun among the household’s inhabitants. Ambitions, desires, and dreams breed a grand deception—and as the lies multiply, events move toward a thrilling and tragic climax. In this richly imagined international bestseller, Deborah Moggach has created the rarest of novels—a lush, lyrical work of fiction that is also compulsively readable. Seldom has a novel so vividly evoked a time, a place, and a passion.Praise for Tulip Fever“Sumptuous prose . . . reads like a thriller.”—The New York Times Book Review   “An artful novel in every sense of the word . . . deftly evokes seventeenth-century Amsterdam’s vibrant atmosphere.”—Los Angeles Times   “Need a brief escape into a beautiful and faraway world? Deborah Moggach’s wonderful Tulip Fever can offer you that.”—New York Post   “Taut with suspense and unexpected revelations.”—Entertainment Weekly   “Elegantly absorbing.”—The Philadelphia Inquirer
Also in This Series