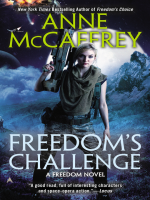 The alien Catteni invaded Earth and enslaved thousands of humans on the planet Botany, where they struggle to survive while colonizing the world for their overseers. Now that they've proved Botany is capable of sustaining life, Kris Bjornsen and her fellow settlers have no intention of surrendering the home they've created for themselves... ? Armed with the knowledge that the true enemy behind the Catteni is the Eosi race, Kris has begun a campaign to free Botany's settlers by raising a rebellion among her people against their parasitic oppressors. ? Aided by her Catteni lover, Zainal, Kris and the colonists manage to steal warships—and discover dissidents on other Eosi-controlled worlds. If all of the subjugated races join forces, they will have an army large enough to win their freedom and their worlds. ? The war of liberation has begun.