Untying the Knot: A Husband and Wife's Story of Coming Out Together 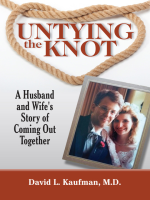 By all accounts, David Kaufman had a good life—he was married to a woman he loved, had two adult children, and a fulfilling career as a radiologist. But as the years passed, he realized that he could no longer deny who he was—he was a gay man.However, before he could tell his wifey, she told him she needed to talk to him about an important issue. It was then that she confided in him that she had accepted the growing awareness that she gay.Her announcement surprised him, but made it easier for him to tell her he, too, was gay. In Untying the Knot, David Kaufman shares a unique story of coming out and how he and his former wife have helped each other on their separate journeys into new lives.