The Gates of Ivory »

The Gates of Ivory: A Novel 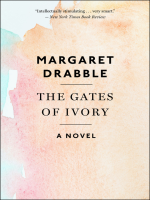 A woman tries to uncover the mysterious fate of a friend in Cambodia in this "very smart" and suspenseful novel (The New York Times Book Review). Liz Headleand is one of London's best-known and most prominent psychiatrists. One day she arrives at work to find a mysterious package, postmarked from Cambodia. Inside, she finds various scraps of paper, a laundry bill from a Bangkok hotel, old newspaper clippings—and pieces of human finger bones. Shocked but intrigued, she realizes the papers belong to her old friend Stephen Cox, a playwright who moved to Cambodia to work on a script about the Khmer Rouge. Convinced Stephen is trying to send her some sort of message, Liz follows the clues in the box to the jungles of Cambodia, risking her life to find her friend. In this thrilling novel, Margaret Drabble continues the trilogy she began in The Radiant Way and A Natural Curiosity, taking us far from the civilized, familiar streets of London, and painting an "urgent, brilliant" portrait of the tumultuous, terror-ridden landscape of Cambodia in the late twentieth century (The Boston Globe). "A tour de force." —Calgary Herald "Unputdownable . . . A sojourn within The Gates of Ivory is not something one soon forgets." —Edmonton Journal