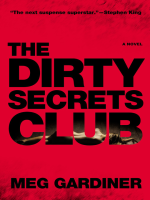 Description
Introducing the writer Stephen King trumpets as “the next suspense superstar” Recently Stephen King devoted an entire Entertainment Weekly column to Meg Gardiner, proclaiming her “as good as Michael Connelly and far better than Janet Evanovich.” How is it possible, he wondered, that this Californian was published only in Britain? Starting now, suspense fans on this side of the pond can get their fix right here: Dutton is proud to introduce Gardiner’s brand-new series heroine, Jo Beckett, in The Dirty Secrets Club . An ongoing string of high-profile and very public murder-suicides has San Francisco even more rattled than a string of recent earthquakes: A flamboyant fashion designer burns to death, clutching the body of his murdered lover. A superstar 49er jumps off the Golden Gate Bridge. And most shocking of all, a U.S. attorney launches her BMW off a highway overpass, killing herself and three others. Enter forensic psychiatrist Jo Beckett, hired by the SFPD to cut open not the victim’s body but the victim’s life. Jo’s job is to complete the psychological autopsy, shedding light on the circumstances of any equivocal death. Soon she makes a shocking discovery: All the suicides belonged to something called the Dirty Secrets Club, a group of A-listers with nothing but money and plenty to hide. As the deaths continue, Jo delves into the disturbing motives behind this shadowy group—until she receives a letter containing a dark secret Jo thought she’d left deep in her past, and ending with the most chilling words of all: “ Welcome to the Dirty Secrets Club .”
Also in This Series