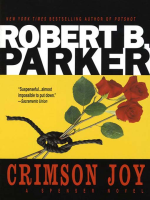 In the city of the Red Sox and the Red Line someone is leaving roses—red ones, of course—on the bodies of women he kills. For a psychologist named Susan Silverman and a P.I. named Spenser, the case is personal. But Spenser knows it's the wrong man. Because the right one has come calling on Susan—with a red rose in hand.

“A novel worth reading with an ending that is worth waiting for.”—South Bend Tribune
Also in This Series