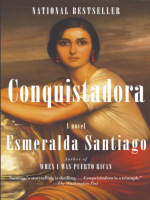 As a young girl growing up in Spain, Ana Larragoity Cubillas is powerfully drawn to Puerto Rico by the diaries of an ancestor who traveled there with Ponce de Leon. And in handsome twin brothers Ramon and Inocente—both in love with Ana—she finds a way to get there. Marrying Ramon at the age of eighteen, she travels across the ocean to Hacienda los Gemelos, a remote sugar plantation the brothers have inherited. But soon the Civil War erupts in the United States, and Ana finds her livelihood, and perhaps even her life, threatened by the very people on whose backs her wealth has been built: the hacienda's slaves, whose richly drawn stories unfold alongside her own in this epic novel of love, discovery and adventure.

From the Trade Paperback edition.
Also in This Series