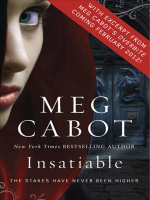 Description
Meena Harper, forced to write about vampires even though she doesn't believe in them, falls in love with Lucien Antonescu, a modern-day prince with a bit of a dark side. It's a dark side a lot of people, like an ancient society of vampire hunters, would prefer to see him dead for. The problem is: Lucien's already dead! And while Lucien seems like everything Meena has ever dreamed of in a boyfriend, he might turn out to be more like a nightmare.
Also in This Series