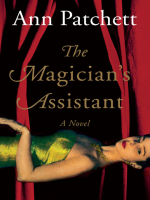 Sabine— twenty years a magician's assistant to her handsome, charming husband— is suddenly a widow. In the wake of his death, she finds he has left a final trick; a false identity and a family allegedly lost in a tragic accident but now revealed as very much alive and well. Named as heirs in his will, they enter Sabine's life and set her on an adventure of unraveling his secrets, from sunny Los Angeles to the windswept plains of Nebraska, that will work its own sort of magic on her.