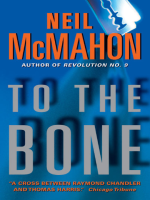 Late one hot summer night, a beautiful young actress named Eden Hale -- only hours removed from breast-augmentation surgery, and writhing in pain -- stumbles to the telephone and dials 911. Within minutes, an ambulance rushes her to San Francisco's Mercy Hospital. But by the time she arrives, she is dying, fast, of a mysterious, unrecognizable condition.

Dr. Carroll Monks, the ER physician on duty, races to sort through her baffling symptoms in the few minutes he has left to save her. Monks has a sudden insight and, against the advice of his peers, risks a radical treatment, which will prove to be either a brilliant maneuver or a potentially deadly mistake. It fails. Eden Hale, vibrantly healthy and barely twenty-five years old, is dead.

The fallout is immediate and intense. The plastic surgeon who operated on Eden -- Dr. D. Welles D'Anton, whose reputation as a surgical guarantor of perfection and agelessness has conferred on him a guru-like status -- blames Monks for her death. Criticism from Monks's hospital colleagues quickly follows and the threat of a lawsuit is not far behind. Monks's career is in jeopardy, but his own guilt and uncertainty are what haunt him worst of all.

Convinced there's a hidden cause to Eden's death, Monks starts to delve into her past. Despite roadblocks that spring up in his path, he soon learns that the former prom queen was not the all-American girl she seemed to be: she was caught up in the world of pornography, and was even, possibly, having an illicit affair with D'Anton. Then Monks uncovers a secret that is far more frightening: other young women in D'Anton's care have wound up missing, dead, or horribly disfigured.

In his search for the truth, Monks is drawn into a culture of unimaginable wealth and vanity -- only to discover that he is being used as a pawn in a decadent game of glamour and cruelty, one that places him in the crosshairs of a deadly psychopath.

With To the Bone, Neil McMahon -- described by the Chicago Tribune as "a cross between Raymond Chandler and Thomas Harris" -- provides a heart-pounding journey into a world of murder and vanity gone wild that you won't soon forget, and demonstrates why he's been called "an author to remember" and "a writer you're going to be hearing a lot about."