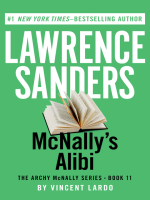 Description
Lawrence Sanders's beloved sleuth Archy McNally returns in a novel by Vincent Lardo Archy McNally, long on the other side of investigations, finds himself playing a new role when he becomes the primary suspect in a murder Hired to retrieve a client's kiss-and-tell-all diary from her blackmailing ex-lover, Archy McNally doesn't expect the mission to go awry. He makes the exchange easily enough, but as the Palm Beach private investigator returns to his sports car, he's knocked out cold. When he wakes up, the diary is gone. Except it wasn't a diary McNally was playing go-between to collect. It was the Holy Grail of lost literature--the original manuscript of Truman Capote's Answered Prayers . McNally will need some divine intervention of his own when he becomes the prime suspect in a homicide investigation headed by vampy, green-eyed blonde Georgia O'Hara. With everyone trying to seize the Capote opus, it's up to McNally to write off a killer who's waiting to close the book on him--permanently.
Also in This Series