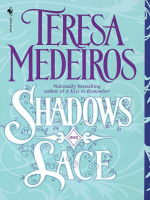 Shadows and LaceWith one roll of the dice, the shameful deed was done. Baron Lindsey Fordyce had gambled and lost, and now his beautiful daughter, Rowena, was about to pay the price. Spirited away to an imposing castle, the fiery innocent found herself pressed into the service of a dark and forbidding knight accused of murder...and much more. Handsome, brooding Sir Gareth of Caerleon had spent years waiting for this chance for revenge. But when he sought to use the fair Rowena to slay the ghosts of his tortured past, be never imagined he'd be ensnared in a silken trap of his own making -- slave to a desire be could never hope to quench....From the Paperback edition.