A week in December »

A week in December 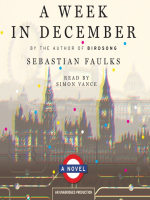 Description
In the blustery final days of 2007, seven characters will reach an unexpected turning point: a hedge fund manager pulling off a trade, a professional football player recently arrived from Poland, a young lawyer with too much time on his hands, a student led astray by Islamist theory, a hack book reviewer, a schoolboy hooked on pot and reality TV, and a Tube train driver whose Circle Line train joins these lives in a daily loop. And as the novel moves to its gripping climax, they are forced, one by one, to confront the new world they inhabit.   Panoramic and masterful, A Week in December melds moral heft and piercing wit, holding a mirror up to the complex patterns and crossings of modern urban life.
Also in This Series