The Hammer of God »

The Hammer of God 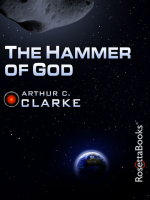 From one of the bestselling science fiction authors of all time comes this heart-stopping far future novel of an asteroid on a collision course with Earth. A century into the future, technology has solved most of the problems that have plagued our time. However, a new problem is on the horizon—one greater than humanity has ever faced. A massive asteroid is racing toward the earth, and its impact could destroy all life on the planet. Immediately after the asteroid—named "Kali" after the Hindu goddess of chaos and destruction—is discovered, the world's greatest scientists begin their search for a way to prevent disaster. In the meantime, Cpt. Robert Singh, aboard the starship Goliath, may be the only person who can stop the asteroid. But this heroic role may demand the ultimate sacrifice. "Entertaining . . . [Clark] handles both ideas and characters with deftness and wit." —Chicago Sun-Times