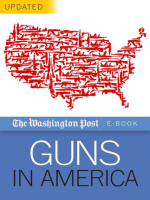 The Fight of the Century. That's what Wayne LaPierre, the National Rifle Association's fiery leader, has promised now that President Obama has proposed some of the most sweeping gun reforms in decades. For more than a year, The Washington Post examined the long, bloody history of gun control in America, an investigation that was reopened and expanded after the massacre of first-graders in Newtown, Connecticut. In a series of articles and web documentaries, Post journalists have shined a light on the hidden life of guns in the country. This prize-winning reporting, collected in an eBook edition for the first time, reveals how politics have hamstrung efforts to curb gun violence, how U.S. guns have fueled the drug war along the Mexican border, and how most of the illegal guns in America are distributed by just a handful of dealers. Most recently, the Post has looked deeply into the power of the NRA as it mounts its biggest battle yet in the 40-year-old war over the Second Amendment.