Dangerous Nation: America's Foreign Policy from Its Earliest Days to the Dawn of the Twentieth Century 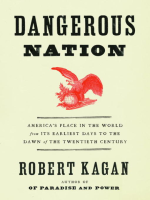 Most Americans believe the United States had been an isolationist power until the twentieth century. This is wrong. In a riveting and brilliantly revisionist work of history, Robert Kagan, bestselling author of Of Paradise and Power, shows how Americans have in fact steadily been increasing their global power and influence from the beginning. Driven by commercial, territorial, and idealistic ambitions, the United States has always perceived itself, and been seen by other nations, as an international force. This is a book of great importance to our understanding of our nation's history and its role in the global community.From the Trade Paperback edition.