What Happened: Inside the Bush White House and Washington's Culture of Deception 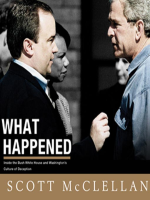 In the bestselling book that provoked a media sensation, former White House press secretary Scott McClellan takes readers behind the scenes of the presidency of George W. Bush.

McClellan belonged to Bush's select inner circle of trusted advisors during one of the most challenging and contentious periods of recent history. Over a period of more than seven years, he witnessed day-to-day exactly how the presidency veered off course: not only by its decision to topple Saddam Hussein but by an embrace of confrontational politics in the face of an increasingly partisan Washington and hostile media.

In this refreshingly clear-eyed book, McClellan provides unique perspective on what happened and why it happened the way it did, including the Iraq war, Hurricane Katrina, and two hotly contested presidential campaigns. He gives readers a candid look into who George W. Bush is and what he believes and explores the lessons this presidency offers the American people as we look to the future.