Pepperoni pizza can be murder »

Pepperoni pizza can be murder 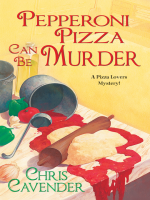 When a friend is accused of murder, a pizza chef and her saucy sister cook up their own investigation in this small town Southern mystery.

As the owner of the best pizzeria in Timber Ridge, North Carolina, Eleanor Swift knows a thing or two about guilty pleasures. But she's about to get a lesson in plain old guilt when she discovers a dead body in her kitchen. She knows her deliveryman Greg Hatcher would never have killed his brother Wade. But all the ingredients are there to make him suspect number one.

Not only was Wade was greedily claiming more than his fair share of the family inheritance, he was also caught making out with Gregg's ex-girlfriend. And to top it all off, Greg has suddenly gone missing. But while the case seems open and shut, Eleanor knows that Wade had plenty of unsavory enemies in his past. Now she and her sister Maddy are out to clear Gregg's name before his final stop is the state penitentiary.