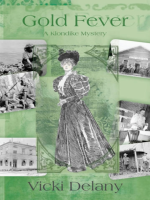 Book Two of the Klondike Mystery Series by Vicki Delany!

A newcomer to town has secrets Fiona doesn't want revealed... Its the spring of 1898, and thousands of people, from all corners of the globe, are flooding into the Yukon Territory in the pursuit of gold, the town of Dawson welcomes them all. The beautiful Fiona MacGillivray, the owner of the very successful Savoy dance hall, is happy to make as much money as possible in as short a time as possible. When her twelve-year-old son Angus saves the life of a Native woman intent on suicide, he inadvertently sets off a chain of events that offers his mothers arch-enemy Joey LeBlanc, the madam with a heart of coal, the opportunity to destroy the Savoy Dance Hall once and for all. Unaware of impending danger, Fiona has other concerns: among the new arrivals are a would-be writer with far more tenacity than talent, and her nervous companion. There's something familiar about the newcomers cut-glass accent, and Fiona MacGillivray is determined to keep her as far away from Angus as possible. Then a killer strikes, and the Mounties are determined to get their man...or woman.

If you loved Gold Fever, check out the next two books of the series, Gold Mountain, and Gold Web