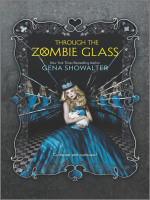 3) The Queen of Zombie Hearts: White Rabbit Chronicles, Book 3
Author:
Gena Showalter
Choose a Format
+ OverDrive eBook
Show Edition
Available Online
Online OverDrive Collection has 2
Quick Copy View
See Full Copy Details
Check Out OverDrive
Description:
Click to view
I thought I had nothing left to give.
I thought wrong.
They started the war.
Now I will end it.
Alice "Ali" Bell thinks the worst is behind her. She's ready to take the next step with boyfriend Cole Holland, the leader of the zombie slayers…until Anima Industries, the agency controlling the zombies, launches a sneak attack, killing four of her friends. It's then she realizes that humans can be more dangerous than monsters&#8230and...
More Info
SHARE

The battle rages on.

Ali Bell and Cole Holland's crew of zombie slayers thought they'd won the war against Anima Industries, the evil company responsible for capturing and experimenting on zombies in an effort to discover the secret to immortality. In the last epic clash, the slayers lost many of their crew and closest friends. But Frosty, the ice man himself, has not recovered from one casualty in particular—the love of his