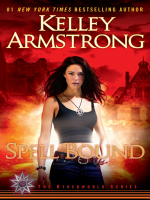 Description
#1 New York Times bestselling author Kelley Armstrong sets the stage for a battle of epic proportions in this novel in her critically lauded Women of the Otherworld series. Savannah Levine is all grown up. As a witch endowed with an array of spells, she is also a force to be reckoned with. As a paranormal investigator she is finally coming into her own. But her last case tore a family apart, and Savannah swore she'd give up her powers to fix the mess she helped create. Someone-or something-must have been listening.Powerless and on the run from witch-hunting assassins, Savannah stumbles upon a gathering storm that threatens the very existence of the Otherworld. The danger is real, and Savannah must somehow join forces with old friends like Elena, Clay, Paige, Lucas, Jaime, and Hope to face their world's greatest threat-and one that just might come from within.
Also in This Series