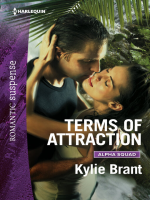 Revisit the explosive final book in award-winning author Kylie Brant's Alpha Squad series
Alpha Squad sniper Ava Carter trusted no one. Especially not Cael McCabe, the security pro who'd hired her as an elite bodyguard and had somehow unearthed her hidden past. Cael, a commanding ex-SEAL, was no stranger to secrets himself. He was intent on concealing from Ava a lifelong obsession for revenge.
Now on assignment in a South American jungle, their professional relationship was steaming up. But both understood not to mix business with pleasure. They needed to deceive each other for the sake of the mission. And both knew their efforts to resist each other would never last...
Originally published in 2009