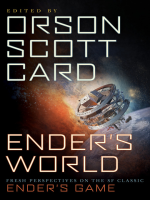 Description
Experience the thrill of reading Ender's Game all over again

Go deeper into the complexities of Orson Scott Card's classic novel with science fiction and fantasy writers, YA authors, military strategists, including:

Also includes never-before-seen content from Orson Scott Card on the writing and evolution of the events in Ender's Game, from the design of Battle School to the mindset of the pilots who sacrificed themselves in humanity's fight against the formics
Also in This Series