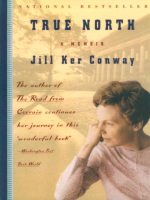 True North is the inspirational Canadian Chapter of Jill Ker Conway's life story, which began with her much love, bestselling memoir, The Road from Coorain. Beginning with her departure from Australia, Jill Ker Conway tells of her romance with Harvard House Master John Conway, of coming to grips with his manic-depressive disorder, and of their move to Canada in 1964 where she became the first female vice-president at the University of Toronto. In this vibrant memoir, we watch as a most private woman makes of herself a public persona in Canada.From the Hardcover edition.