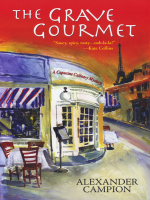 In Alexander Campion's witty debut, chic Parisian policewoman Capucine LeTellier plunges into a uniquely Parisian affair of gastronomic delights and bureaucratic intrigue to close a case that could make her career or kill it...

After dining on such delicacies as oyster sorbet and avocado soufflé, JeanLouis Delage, président of automotive giant Renault, has been found dead in the freezer of Le Diapason, a restaurant owned by Chef JeanBasille Labrousse, a renowned restaurateur extraordinaire.

Capucine is uniquely suited to the case, as her husband Alexandre is a food critic well connected to the culinary world. In between sharing sumptuous meals and fine wine with Alexandre at some of Paris' finest eateries, Capucine struggles to win the respect of her new squad of detectives and crack both the case and the guarded secrets of the restaurant staff.

From the Champs-Élysées to the twinkling banks of la Seine, The Grave Gourmet is a thrilling mystery gastronomique, combining the allure of the Parisian haute cuisine restaurant scene with corporate espionage and political scandal in a dish that is très magnifique!

"A saucy detective, a spicy murder, a soupcon of haute cuisine with Paris as a backdrop. Oohlala! What a feast. Alexander Campion captures the French flavor and Parisian personality perfectly in his tasty debut novel." Kate Collins, author of the Flower Shop Mysteries

"Alexander Campion gives us a delicious mystery and a glimpse at the heights and depths of high cuisine. A fun book with a very different flavor." Carolyn Haines, author of the Bones Mysteries

"Anyone who loves Paris will adore The Grave Gourmet. French flic Capucine LeTellier is sure to enchant readers with her Gallic charm as she tracks a coldblooded killer in the City of Light. Bien fait!" Leslie Meier, author of the Lucy Stone Mysteries

"The witty and beautiful Paris police investigator, Capucine LeTellier, takes us on a tour of her fabled city the likes of which we've never known. This is an astonishing debut that raises the bar on today's detective novel." Aram Saroyan, author of Door to the River