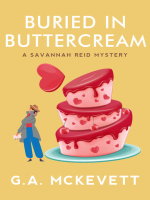 After a recent brush with death, plus-sized P.I. and bride-to-be Savannah Reid has decided to stop sweating the small stuff. But when an event planner comes in to arrange her wedding, Savannah discovers that murder can ruin even the best laid plans. . .

Hailed as the wedding planner to the stars, Madeline Aberson has orchestrated some of the most exclusive soirees in Hollywood. But when Madeline becomes embroiled in a nasty divorce, her life falls apart, and rumors swirl that her parties have become total duds. Desperate for work, Madeline finds herself planning far less glamorous affairs, including none other than Savannah Reid's wedding to Dirk Coulter.

It doesn't take long for the opinionated Madeline to get on Savannah's last nerve, and when the big day finally arrives, Savannah can't wait to send Madeline packing. But when the bride finds Madeline's body face down in the pool, floating among an elegant array of rose petals, it's clear that someone has already hastened the diva's departure. For better or for worse Savannah and Dirk put their wedding on hold, vowing instead to find out who killed Madeline and why. . .