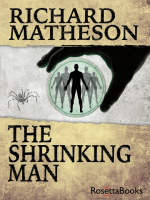 Description
The legendary novel of science-fiction horror: "The author who influenced me the most as a writer was Richard Matheson" (Stephen King). After he is exposed to a radioactive cloud, Scott Carey finds himself shrinking, slowly, day-by-day, inch-by-inch. Scott once had a normal, everyday existence as a husband and father, but as time passes, he becomes a national spectacle, something worthy of newspaper headlines. As Carey shrinks, smaller and smaller, his family become giants, more and more unreachable, and even the family cat becomes a predatory menace. In this world of disproportion, increasingly perilous with each passing day, Scott struggles to survive--and is pushed to the very limits of fear and existence . . . Adapted into the Hugo Award-winning film The Incredible Shrinking Man , this is a classic by the author of I Am Legend and other renowned works--a master of imagination whom Ray Bradbury called "one of the most important writers of the twentieth century." "A classic of suspense as poignant as it is frightening--a mix that only Richard Matheson could pull off." --Dean Koontz
Also in This Series