A Woman of Africa »

A Woman of Africa: If You Run From Both the Sun and the Moon You Must One Day Confront Your Shadow 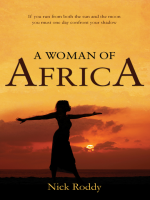 Description
'I am an African woman. That's not a political statement. I am not a Whoopee Goldberg or an Oprah Winfrey, a middle-class American in search of an identity or asserting a political right. I am a woman and I am African. That is all there is to it, and that is my tragedy.'In Douala, Cameroon, an African woman relates her life as a woman of Africa to a white oil company worker. Her story can be seen as an experience which encompasses a range of issues that affect women in Africa today, it touches upon Aids tribal prejudice, prostitution, poverty and ignorance.Viewing her life through the conflicting filters of religion and cynicism, her narrative is entertaining and moving. She relates, with no trace of self-pity, her life as a Biafran refugee, as a women in modern Cameroon and as an uneducated Anglophone in today's Douala.The story she tells starts from her birth during the refugee crisis of Biafra. She grows to be a willful child who realises there is life outside the ghetto. The book follows her as she develops into a young woman whose singular, eccentric and colourful character drives her to embrace life furiously. In doing so she challenges the social norms of her society.Rarely self-analytical, she forces an almost existentist path through her limitations, frequently falling along the way but always pulling her self back up without a trace of despair. Through the force of her character she overcomes obstacles to succeed in her dream to become A Woman of Africa.This is an important new novel - and a fictionalised reworking of real life stories told to author Nick Roddy in Douala by Biafran refugees. Nick's own experiences in the region also inform this novel - while writing it he was kidnapped by MEND (Movement for the Emancipation of the Niger Delta) and held captive in the Jungle for 3 weeks. Nick still spends part of each year living and in Douala.
Also in This Series