Darker Side of Desire & the Sheikh's Pregnant Prisoner: An Anthology 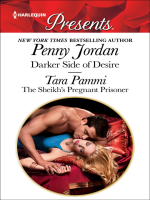 A bond was forged the day Claire saved the infant heir to the desert kingdom of Omarah from assassins. Otherwise, she wouldn't have agreed to masquerade as the boy's mother—and Raoul D'Albro's unwanted wife. But nothing could shield Claire from his powerful masculinity or their mutual desire!

And re-discover another thrilling Harlequin Presents, THE SHEIKH'S PREGNANT PRISONER, by Tara Pammi

When Zafir Al Masood finds out the woman he had a whirlwind affair with is carrying his child and intending to keep it secret, he imprisons feisty Lauren in his palace. Unlike him, his baby will not be the illegitimate heir of a sheikh. And to ensure this, Zafir will make Lauren his wife...!