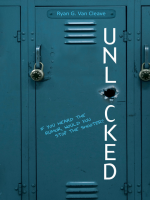 Fourteen-year old Andy is the janitor's son, and an outcast. It's rumored that formerly popular Blake, who has become a loner since his dad's death, has a gun hidden in his locker, and beautiful, unattainable Becky Ann wants to see it. In order to impress her, Andy steals the keys from his dad and opens up Blake's locker, but the gun isn't there. A friendship develops between the two loners, and Blake shares most of his secrets with Andy, including the gun. But there's one secret that worries Andy more than anything-the date circled on Blake's calendar. Does Blake have something planned? Something that Andy can prevent?