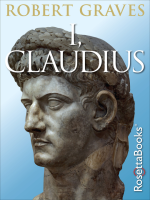 "One of the really remarkable books of our day"—the story of the Roman emperor on which the award-winning BBC TV series was based (The New York Times). Once a rather bookish young man with a limp and a stammer, a man who spent most of his time trying to stay away from the danger and risk of the line of ascension, Claudius seemed an unlikely candidate for Emperor. Yet, on the death of Caligula, Claudius finds himself next in line for the throne, and must stay alive as well as keep control. Drawing on the histories of Plutarch, Suetonius, and Tacitus, noted historian and classicist Robert Graves tells the story of the much-maligned Emperor Claudius with both skill and compassion. Weaving important themes throughout about the nature of freedom and safety possible in a monarchy, Graves' Claudius is both more effective and more tragic than history typically remembers him. A bestselling novel and one of Graves' most successful, I, Claudius has been adapted to television, film, theatre, and audio. "[A] legendary tale of Claudius . . . [a] gem of modern literature." —Publishers Weekly, starred review