Their fractured light: a Starbound novel 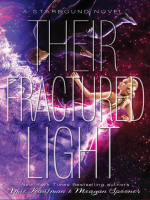 Description
Set in the same world as the Starbound series' (Disney Hyperion) earlier hits but featuring new characters, this title is bound to be accessible and enjoyable to fans and new readers alike. A year ago, Flynn Cormac and Jubilee Chase made the now infamous Avon Broadcast, calling on the galaxy to protect them from destruction. A year before that, Tarver Merendsen and Lilac LaRoux were rescued from a terrible shipwreck. Now, on the planet of Corinth, all four are about to collide with two new players, who will bring the fight against LaRoux Industries to a head.
Also in This Series