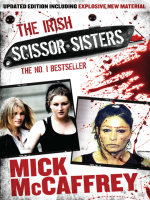 Everyone was just arguing; me mam kept saying to me and Linda, "Just please kill him for me; kill him for me." Then she got the hammer and the knife ... but he wouldn't let Linda go, and I cut him.' On 20 March 2005 Charlotte Mulhall slashed a four-inch gash in Farah Swaleh Noor's throat. She cut her mother's lover again and again with the razor-sharp blade, while her sister Linda hit him repeatedly with the hammer. They spent hours hacking his body into eight pieces, before dumping his butchered remains in the Royal Canal and hiding his severed head, which has never been found. Christened the Scissor Sisters by the media, their names are synonymous with violence and brutality. But what really happened that night? What part did Kathleen, their 'mam', play and did John, their tragic father, help to dismember Farah's remains? And what about the victim – why did Farah carry knives and like to burn himself? Using witness statements and the Mulhalls' own words, Mick McCaffrey reconstructs the horrific murder in graphic detail, investigating the motives of all the people involved. He gets inside the minds of the women who carried out this unspeakable crime and depicts the intensive garda hunt that led to the conviction of three of the most notorious criminals in Ireland's history. In this new updated edition of The Irish Scissor Sisters, McCaffrey reveals how he tracked down Kathleen Mulhall and exposed her hideout in the UK, forcing her to return to Ireland and face the consequences of her appalling crime. He examines the Mulhalls' life behind bars, where mother and daughters were reunited in shame. And he talks exclusively to the family of the victim, who are now living in poverty, without the financial support of their beloved Farah. The Irish Scissor Sisters is the definitive account of a sickening murder that sent shockwaves through Irish society.