Red, White & Liberal: How Left Is Right & Right Is Wrong 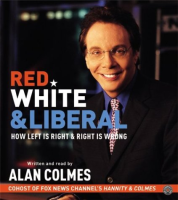 Description
In Red, White & Liberal, Alan Colmes addresses a fundamental question: In this time of uncertainty, how can we protect our freedom without diminishing our liberties, while burnishing our rightful place as the world's beacon of democracy? Colmes urges Americans to see past the tactics of the vocal right and to combat the problems that threaten our liberties, including the government's manipulation of the war on terror to silence critics and expand its powers to frightening proportions; the lies about the war in Iraq and the situation in Afghanistan; the right's misguided use of religion to justify hatred and prejudice; and the successful conservative smear campaign against the left that has turned "liberal" into a four-letter word.

Colmes calls America back to its liberal roots. He reminds us that our forefathers spoke out against the status quo and that they believed the ability to express dissent was crucial to keeping a democracy healthy. With thoughtful, provocative arguments, hard facts and searing humor, Colmes urges us to extend our hands across party lines to find real solutions, protect our shores, and preserve our freedoms.