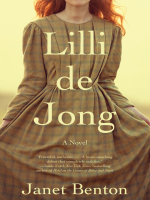 Description
"In 1883 Philadelphia, Quaker schoolteacher Lilli de Jong finds herself faced with a seemingly impossible task: how can she keep her infant daughter after being cast out by her family, abandoned by her fiancé, and rejected by society? After the unexpected death of her beloved mother, a prominent Quaker in their Germantown community, Lilli de Jong's once-orderly life becomes increasingly unrecognizable. Her father eschews their faith by marrying a cousin from outside their religious community, and Lilli is forced to forfeit her position as a teacher. Shortly thereafter, her brother and her fiancé, Johann, leave for Pittsburgh to try their luck at the ironworks, promising to send for Lilli once they establish themselves. After succumbing to passion the night before Johann's departure, Lilli soon finds herself unwed and pregnant, the subject of scandal. Retreating to a charitable home for wronged women, Lilli intends to give her daughter up for adoption. But when she grasps the Dickensian life awaiting Charlotte as the castoff of an unmarried woman, Lilli resolves that whatever their future may be, mother and child must stay together. And so she embarks upon the herculean task of providing for herself and her daughter, while at every turn the pair are beset by judgment, misogyny, and misunderstanding. Lilli de Jong is a historical saga, an intimate romance, and a lasting testament to the transformative power of motherhood"--
Also in This Series