Every Boy's Got One »

Every Boy's Got One 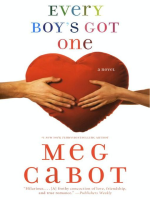 Cartoonist Jane Harris is delighted by the prospect of her first-ever trip to Europe. But it's hate at first sight for Jane and Cal Langdon, and neither is too happy at the prospect of sharing a villa with one another for a week--not even in the beautiful and picturesque Marches countryside. But when Holly and Mark's wedding plans hit a major snag that only Jane and Cal can repair, the two find themselves having to put aside their mutual dislike for one another in order to get their best friends on the road to wedded bliss--and end up on a road themselves ... one neither of them ever expected.