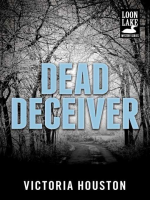 It's late January in Loon Lake and bodies abound: a woman on snowshoes has been discovered wedged under a wooden bridge on a cross-country ski trail. A day later, Police Chief Lewellyn Ferris interviews a couple who alleges that the wife, a former nun, is being stalked. Meanwhile, Loon Lake is hosting an International Ice Fishing Festival with problems.