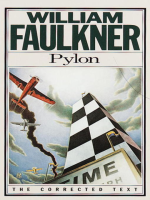 One of the few of William Faulkner's works to be set outside his fictional Yoknapatawpha County, Pylon, first published in 1935, takes place at an air show in a thinly disguised New Orleans named New Valois. An unnamed reporter for a local newspaper tries to understand a very modern ménage a trois of flyers on the brainstorming circuit. These characters, Faulkner said, "were a fantastic and bizarre phenomenon on the face of the contemporary scene. . . . That is, there was really no place for them in the culture, in the economy, yet they were there, at that time, and everyone knew that they wouldn't last very long, which they didn't. . . . That they were outside the range of God, not only of respectability, of love, but of God too." In Pylon Faulkner set out to test their rootless modernity to see if there is any place in it for the old values of the human heart that are the central concerns of his best fiction.