The Snake Goddess colors the world: a Chinese tale told in English and Chinese 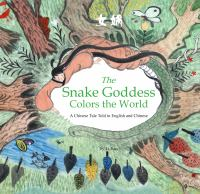 Description
This beautifully illustrated multicultural children's book tells a classical Chinese myth in both English and Chinese. Long long ago, the world was a colorless, gray place. It had stayed that way for thousands of years. People never expected anything different until one day, the colorful Snake Goddess, Nuwa, fell from the sky. She was determined to bring color and beauty to the gray nothingness of the earth, but all the colors kept running out through a giant hole in the sky. To fix the hole and bring color to the world, Nuwa would have journey near and far to find the five magical colored stones that were her only hope for fixing the sky. Join the Snake Goddess on her journey to bring color to a desolate world! Other books in the Chinese Zodiac Series (as well as the year of that animal) include: Little Pigs and the Sweet Rice Cakes --2007 & 2019 Magical Rooster --2005 & 2017 Water Dragon --2012 & 2024 Little Monkey King's Journey --2016 & 2028 Horse and the Mysterious Drawing --2014 & 2026 Sheep Beauty --2015 & 2027 Bronze Dog --2006 & 2018 Little Rat and the Golden Seed --2008 & 2020 Little Calf --2009 & 2021
Also in This Series