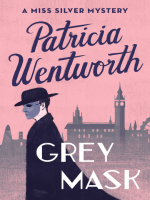 Description
Governess-turned-detective Miss Silver investigates a deadly conspiratorial ring Charles Moray has come home to England to collect his inheritance. After four years wandering the jungles of India and South America, the hardy young man returns to the manor of his birth, where generations of Morays have lived and died. Strangely, he finds the house unlocked, and sees a light on in one of its abandoned rooms. Eavesdropping, he learns of a conspiracy to commit a fearsome crime. Never one for the heroic, Charles's first instinct is to let the police settle it. But then he hears her voice. Margaret, his long lost love, is part of the gang. To unravel their diabolical plot, he contacts Miss Maud Silver, a onetime governess who applies reason to solve crimes and face the dangers of London's underworld.
Also in This Series