The keepsake: a Rizzoli & Isles novel 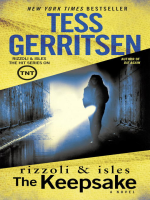 Description
"For untold years, the perfectly preserved mummy had lain forgotten in the dusty basement of Boston's Crispin Museum. Dubbed "Madame X, " the recently rediscovered mummy is, to all appearances, an ancient Egyptian artifact. But medical examiner Maura Isles discovers a macabre message hidden within the corpse--horrifying proof that this "centuries-old" relic is instead a modern-day murder victim. When the grisly remains of two other women are found, it becomes clear to Maura and Boston homicide detective Jane Rizzoli that a maniac is at large. Now Maura and Jan must unravel a murderer's twisted endgame before the Archaeology Killer adds another chilling artifact to his monstrous collection."--Back cover.
Also in This Series