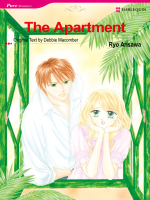 When Hilary got a place on the San Francisco Symphony as a flute player, she decides to move into her own place to escape her restricted life with her over-protective mother. Although excited at her new found freedom, it doesn't last for long. The next morning, the quiche she left in the fridge for breakfast was gone, her milk had been used and an unfamiliar bag was in the living room! As she stood confused, a handsome man she had never seen before appeared in front of her and says to her angrily "what are you doing in my house?"