Arrows of the Night »

Arrows of the Night: Ahmad Chalabi and the Selling of the Iraq War 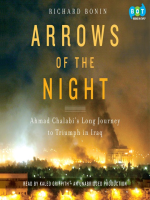 In 1958, Ahmad Chalabi's wealthy Shiite family was exiled from Iraq after a revolution that ultimately put Saddam Hussein in power. The young Chalabi devoted his life to restoring his family to prominence. His first coup attempt was in 1963 at age nineteen, while on a school break from MIT. His next was aided by Iranian intelligence. But as the years passed and Saddam stayed in power, Chalabi made an audacious decision: he needed the support of both Iran and its powerful archenemy, the United States.

Drawing on unparalleled access to Chalabi, Bonin traces the exile's ingenious efforts to stoke a desire for Iraqi regime change in the U.S. He narrates Chalabi's ill-fated engage­ment with the CIA and his later focus on neoconservative policy makers who rose to power under George W. Bush. As a result, from day two of the Bush presidency, the push for a new Iraq was on, with the intent to install Ahmad Chalabi as overseer of U.S. interests in the Middle East. The outcome was perhaps the biggest foreign policy disaster in our history and a triumphant end to Chalabi's forty-five-year quest.

Today, as we prepare to withdraw our troops from Iraq, Arrows of the Night is full of shocking revelations about how we got there, including the true story of Chalabi's relation­ship with Iran. This page-turner, with its definitive account of the war, irrevocably alters a story we thought we knew.


From the Hardcover edition.