Agatha Raisin and the Case... »

Agatha Raisin and the Case of the Curious Curate 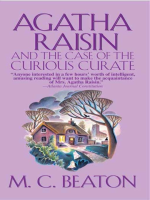 Amateur sleuth Agatha Raisin is going through a
man-hating phase after being left by her husband, is bored with tottering
around Carsely, and wishes men would just sod off, so she is unmoved by news of
a captivating new curate. But when she meets the golden-haired, blue-eyed
Tristan Delon, she is swept off her feet—along with every other female in the
village. She is positively ecstatic when he invites her to dine with him, but
the next day Agatha is left with a hangover from hell—and the curate is found
dead. Carsely is whisked from time-warp monotony to a hotbed of murder and
intrigue, and Agatha Raisin is back on track. As the corpses multiply,
ever-obstinate Agatha trails clues from Lilac Lane to London, unmindful that
someone wicked is arranging that Mrs. Raisin's cats never again hear their mistress'
footfall on the path.